So, you know, there's a general layperson's understand of what obsessive compulsive disorder (OCD) is.

But it's more complicated than that.

...If you have intrusive thoughts (obsessions) that seem fearful, or dangerous to you, 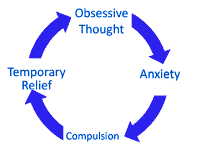 ...If you have impulses that you're worried you might act on...

or if you're worried that something bad is about to happen
or has happened, that you may have inadvertently caused,

AND THEN you do something to make it stop. or go away. or to erase the danger:  "Compulsions" are something that make you feel better or safer in the moment, even if they don't seem to make sense, and they might include:

and then you feel better, for a little while.  But the thoughts and compulsions are throwing tantrums, demanding attention.

If this is your experience, it's possible OCD might be a problem for you. And we can let you know for sure.

ExRT, Exposure/response/prevention therapy is the  gold standard  for treating OCD.

Here's information from the International
OCD Foundation, explaining ER/P
.
AND DID YOU KNOW
These disorders are closely related to OCD, with similar treatment profiles:
And yes, I treat them too.
You and me, Together.
We can tame the thought monster.